PVC, the full name is Polyvinylchloride, the main ingredient is polyvinyl chloride, and other ingredients added to enhance its heat resistance, toughness, ductility and so on. The top layer of this surface film is a lacquer, the main ingredient in the middle is polyvinyl chloride, and the lowest layer is the back coat adhesive. It is a kind of synthetic material that is popular, popular, and widely used in the world today. 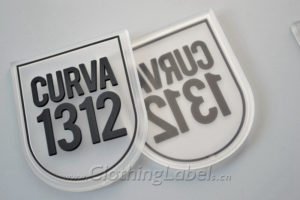 We provide custom products and services for customers all over the world since 2008. The main product includes clothing labels & tags, buttons, hangers, packaging, etc. All of our products can print with your LOGO. Low MOQ.

“Lan + Angela, I received the patches. They are absolutely beautiful. Thank you SO much. You always do quality work”.
-Elena Victoria 11/24/2020

“Dear Lan,
Thank you very much I received the custom clothing labels today. They are perfect! I love how everything is so well made and the quality is brilliant. Thank you so much. Have a happy new year”.
-Riham 1/1/2021