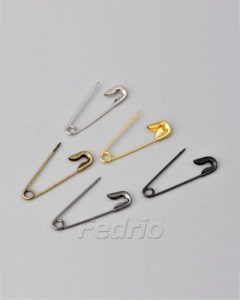 Safety pin. Scientific Inventions Walter Hunt Before zippers, buttons, or other fasteners, our ancestors used large pins to tie their clothes together. However, the needle also brings some problems. The sharp needle tip is dangerous and the needle easily slips off.

Around 4,000 years ago in Crete, someone made a device that looked like a large safety pin to buckle clothes, and found a very good solution to the above problem. This type of bronze pin is bent over and buckled with one end to avoid danger from the needle tip. Later pins also had a spring to hold them firmly.

However, by the 19th century, people had forgotten the ancient pin until Walt Hunter invented the modern safety pin in 1849. Hunter came up with many inventions, and usually they all got patents.

Because patent applications need to include drawings, Hunter often owes him the debt. He agreed to use his patent rights on what could be done with an old metal wire and settled the painter’s debt. Hunter used it to make a safety pin. For such a useful invention, a painter named Richardson actually paid only Hunter $400. Hunter was satisfied with this, although he still sold his patent for invention cheaply.

Many ancient people – from the Greeks and Romans to the Celts of ancient Britain – used old-fashioned safety pins. People often wear such pins high, so they are more like pins than brooches.